Being There: Putting Brain, Body, and World Together Again 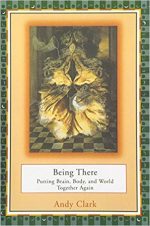 By Andy Clark (1996)
Brain, body, and world are united in a complex dance of circular causation and extended computational activity. In Being There, Andy Clark weaves these several threads into a pleasing whole and goes on to address foundational questions concerning the new tools and techniques needed to make sense of the emerging sciences of the embodied mind. Clark brings together ideas and techniques from robotics, neuroscience, infant psychology, and artificial intelligence. He addresses a broad range of adaptive behaviors, from cockroach locomotion to the role of linguistic artifacts in higher-level thought.

Digital Mantras: The Language of Abstract and Virtual Worlds

By Steven Holtzman (1995)
Holtzman, who holds a doctorate in computer science, provides a highly stimulating discussion of the integration of music, art, and language with recent trends in computer technology. He traces the evolution of formal abstract structures as they exist in the music of Schoenberg and Boulez, the art of Kandinsky, and the language grammars of Chomsky. Since computers have the capability to manipulate structures, the author contends that we have reached new frontiers of unexplored artistic creativity; he foresees new worlds of creative expression-that is, “virtual worlds.” This text wisely addresses the issues of dissonance in electronic music and human emotion and understanding in the creative process. Holtzman’s journey into “virtual reality,” sprinkled with a touch of Indian mysticism, is a totally intelligible, enjoyable venture.

By Lawrence Weschler (1995)
In the non-Aristotelian, non-Euclidean, non-Newtonian space between the walls of the Museum of Jurassic Technology in Los Angeles exist bats that can fly through lead barriers, spore-ingesting pronged ants, elaborate theories of memory, and a host of other off-kilter scientific oddities that challenge the traditional notions of truth and fiction. Lawrence Weschler’s book, expanded from an article for Harper’s, is, at turns, a tour of the museum, a profile of its founder and curator, David Wilson, and a meditation on the role of imagination and authority in all museums, in science and in life. Mr. Wilson’s Cabinet of Wonder is an exquisite piece of “magic realist nonfiction” that will prove utterly captivating.

Edited by Edward Shanken (2003)
Long before e-mail and the Internet permeated society, Roy Ascott, a pioneering British artist and theorist, coined the term “telematic art” to describe the use of online computer networks as an artistic medium. In Telematic Embrace Edward A. Shanken gathers, for the first time, an impressive compilation of more than three decades of Ascott’s philosophies on aesthetics, interactivity, and the sense of self and community in the telematic world of cyberspace. This book explores Ascott’s ideas on how networked communication has shaped behavior and consciousness within and beyond the realm of what is conventionally defined as art.

By E.H. Gombrich (1963)
Prompted by modern critical discussions, the fourteen papers, lectures and articles assembled in this volume revolve around issues raised by twentieth-century art and theory. Taking abstraction and expression as his main themes, Professor Gombrich’s essays encompass the whole of the history of art, and include major articles on the social history of art, visual metaphor, tradition and expression, and psychoanalysis.

Edited by Noah Wardrip-Fruin and Nick Montfort (2003)
This reader collects the texts, videos, and computer programs–many of them now almost impossible to find–that chronicle the history and form the foundation of the still-emerging field of new media. General introductions by Janet Murray and Lev Manovich, along with short introductions to each of the texts, place the works in their historical context and explain their significance. The texts were originally published between World War II–when digital computing, cybernetic feedback, and early notions of hypertext and the Internet first appeared–and the emergence of the World Wide Web–when they entered the mainstream of public life.

Multimedia: From Wagner to Virtual Reality

Edited by Randall Packer and Ken Jordan (expanded edition, 2002)
Readers interested in the history of multimedia should be enthralled by this collection of hard-to-find essays. “Outline of the Artwork of the Future,” for instance, was first published in 1849, and its author was the great German composer Richard Wagner, who envisioned a new kind of stage drama that united music, visual effects, poetry, and dance. Skip forward seven decades, and here’s 1924’s “Theater, Circus, Variety,” by Laszlo Moholy-Nagy, one of the foremost practitioners of the Bauhaus school of art. His elaboration of Wagner’s ideas incorporated the revolutionary idea of removing the so-called fourth wall and involving the audience in the play. Similarly, these essays trace the evolution of electronic media, film, and books (William Burroughs’ 1964 piece, “The Future of the Novel,” is itself worth the price of admission). A remarkable blending of past and present, these essays remind us that today’s wondrous inventions didn’t just spring into existence out of nothingness.

Searchlight: Consciousness at the Millennium

Edited by Lawrence Rinder (1999)
This book is an unprecedented exploration of the nature of consciousness and its embodiment in many forms of contemporary art including painting, sculpture, installation, video, film, and computer media. At what is possibly the most portentous moment in recent history–the turn of the millennium–Searchlight reveals the threads of a new aesthetic, reaching from the early nineteenth century through its extraordinary fulfillment in the art of the present. Consciousness is the bedrock of all experience, the foundation of all perception and interaction, the source of meaning. As such, it may be said to have been the primary subject of art for the past 125 years, ever since the Modernist revolution of the nineteenth century shifted artists’ goals from the direct representation of the seen world to the expression of felt experience. As art increasingly focused on the perceiver rather than the perceived, the consciousness of the artist and the viewer moved to the foreground of the artistic event.

A Thousand Years of Nonlinear History

By Manuel De Landa (1997)
De Landa attacks three domains that have given shape to human societies: economics, biology, and linguistics. In every case, what one sees is the self-directed processes of matter and energy interacting with the whim and will of human history itself to form a panoramic vision of the West free of rigid teleology and naive notions of progress, and even more important, free of any deterministic source of its urban, institutional, and technological forms. Rather, the source of all concrete forms in the West’s history are shown to derive from internal morphogenetic capabilities that lie within the flow of matter-energy itself.